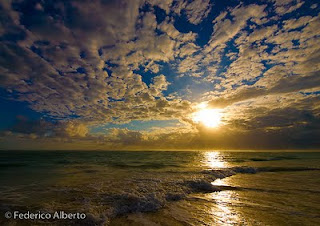 It's Good Friday, and Earth Day. A quarter of Americans believe Barack Obama is an alien. The rate of natural disasters due to global warming has increased 400 percent. Obviously we are not doing well, afflicted, you could say.

Here is some sorely needed balm for our afflictions, some home-grown wisdom from the most eminent of American thinkers, Ralph Waldo Emerson. It's about prayer, about the ties between the seemingly disparate and divided, about redemption, and it is a discouragement to the proud who think they have all the answers. Emerson was a Platonist in that he regarded the ultimate ground of reality to be the world of ideas, and he was way ahead of his time in identifying the ways science is ultimately about faith.

"The problem of restoring to the world original and eternal beauty is solved by the redemption of the soul. The ruin or the blank that we see when we look at nature, is in our own eye. The axis of vision is not coincident with the axis of things, and so they appear not transparent but opaque. The reason why the world lacks unity and lies broken and in heaps, is because man is disunited with himself. He cannot be a naturalist until he satisfies all the demands of the spirit. Love is as much its demand as perception. Indeed, neither can be perfect without the other. In the uttermost meaning of the words, thought is devout, and devotion is thought. Deep calls unto deep. But in actual life, the marriage is not celebrated. There are innocent men who worship God after the tradition of their fathers, but their sense of duty has not yet extended to the use of all their faculties. And there are patient naturalists, but they freeze their subject under the wintry light of their understanding. Is not prayer also a study of truth - a sally of the soul into the unfound infinite?"
Posted by Unknown at 8:16 AM No comments:

A World of Hurt

I've got other things I should be doing. There are a couple of lambs who need some bottle help to survive, about an acre of vegetable beds to dig. I'm on my spring vacation. I should be sleeping, by all rights, but Michael is off this morning to D.C. with the school trip and was up at 3:00 am banging around like a little elephant downstairs. Did I say elephant? I'm sorry Michael. No offense.
The people in charge are an insult to elephants, actually. Elephants would never do to their own kind what the current batch of legislators in the NH House want to do to this state. Taking lowball revenue estimates, adding cuts to tobacco taxes, gambling taxes and others, they are now proposing a budget half a billion dollars below the governor's already austere plans. The idea, in essence is to take us back to the 1950s by way of meeting a ginned up so-called fiscal emergency. Gone is the pretense that this is about job creation or economic recovery, or even living within our means, although that is the line they will continue to hammer to the uninformed. This is all about unraveling a social fabric that was largely built, ironically, by Republicans.
Democrats have only been in the majority for four years in New Hampshire in the last 150, and this is the reaction we get. Twenty five percent cut out of the state's Department of Health and Human Services for poor families, children, disabled and mental health services. When asked about what kind of burden this would place on towns, who are the social safety net of last reserve and always have been, this is what Kenneth Wyler, R-Kingston, chair of the House Finance Committee and chief architect of the House budget had to say. "You just stop taking in the door everybody who is a little worried." (NH Business Review, April 8, 2011)
Talk about setting them on an ice floe. It brings to mind the crucial difference between Republicans and Democrats voiced in 1984 by Mario Cuomo, and I believe it is worth repeating, in the interests of finding our long repressed Democratic gonads. Yes, Barack, I'm talking to you. What's the difference between Democrats and Republicans?

"It's an old story. It's as old as our history. The difference between Democrats and Republicans has always been measured in courage and confidence. The Republicans -- The Republicans believe that the wagon train will not make it to the frontier unless some of the old, some of the young, some of the weak are left behind by the side of the trail. "The strong" -- "The strong," they tell us, "will inherit the land."
We Democrats believe in something else. We Democrats believe that we can make it all the way with the whole family intact, and we have more than once. Ever since Franklin Roosevelt lifted himself from his wheelchair to lift this nation from its knees -- wagon train after wagon train -- to new frontiers of education, housing, peace; the whole family aboard, constantly reaching out to extend and enlarge that family; lifting them up into the wagon on the way; blacks and Hispanics, and people of every ethnic group, and native Americans -- all those struggling to build their families and claim some small share of America. For nearly 50 years we carried them all to new levels of comfort, and security, and dignity, even affluence. And remember this, some of us in this room today are here only because this nation had that kind of confidence. And it would be wrong to forget that."
The foolhardy elements in the Republican budget are many and noteworthy and have sparked wide-spread outrage. even among business leaders, although falling on mostly deaf ears, it seems. But here is one example - cuts to vocational and training centers across the state, which concerns me in my workplace, not that I teach those proud, unruly kids who ride the bus to learn auto tech and cooking and drafting and hair styling. I don't, but I see them in the halls. Those kids in their Carharts and work boots and the faces of a long distant agricultural heritage, they don't take Spanish, they don't take AP History. But I can recognize a people when I see them and that's who they are. They are New Hampshire, and cutting the vocational programs is cannibalism, preying on our own children. Not even elephants. 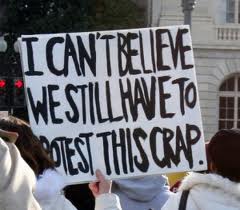 Posted by Unknown at 6:30 AM No comments:

It's Here At Last 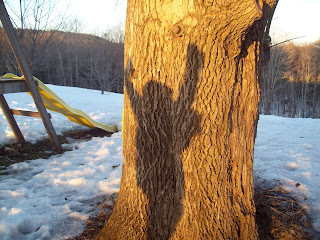 The spring finally seems to have gotten the best of the snow. It's all melting just in time as we are down to the last of the wood. The first crocuses are coming up, and the first lambs are being born. But not all is well, the lambs are weak, and the first two, to Snow White's daughter, died. Our dominant ewe, Bully, seems to be preventing the others from getting enough grain. The animal kingdom's cruelty is made worse by the stupidity of its subjects. Kind of like the Republicans. The prefrontal cortex is not their strong suit, consequently they don't see complexity and sometimes they make bad mistakes. For instance, when I lock Bully in the barn to let the others feed, they wander over to see what's wrong with their fearless leader instead of eating what's in the grain bins. Easily manipulated by the elites. Oh, well. We may have to balance things out by culling the older ewes including Bully. But not for now; we'll let November be the cruelest month, at least on the farm. Don't get me started on events at the state capital. The cull there will come in 2012, hopefully.

Today I finished manuring the blueberries and apple trees with chicken poop. And I made up a mix of bone meal and wood ash as a soil amendment for the apple trees. I planted out a few trees from the nursery to fill in some gaps, leaving last year's grafts for another year in the bed. I took out some rotten planks from the picnic table to be replaced soon, and oh, yeah, and I put up another trampoline we bought at Dicks for $170.  We are set for warmer weather. And my old muscles are sore. But so much happier. Never mind the bad news for now. Spring is here and the sap is running.
PNYZTYTHFY2Z


(Photo by Michael Caplan)
Posted by Unknown at 10:24 PM No comments: