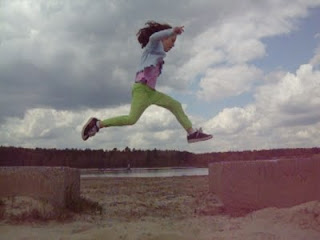 Just do it. I love that phrase, a cultural icon taken from the advertising world. It's become short hand for an attitude towards the world, not necessarily new, that used to be summed up as "can do." As any child knows from playing, the key is to trust in yourself and in your powers to make the leap, and come down on the right side of the equation.

In the master's program I am doing, the textbook on educational reform references this with the maxim that "the effectiveness of educational reform is inversely proportional to the length and polish of the reform document." The key is that people are motivated through the heart, not the mind, and effective action leads by example.

In the world of geopolitics, and I'm taking a big leap here, (but what's a blog for?) I think this is what Obama has done in regards to coming down on the side of explicitly stating the lines of a settlement between Palestine and Israel. Although he has ruffled feathers in Israel by seeming to preempt the Israeli negotiating position, what he has done is try to unstick the peace process and move it forward. I think he has done Israel a tremendous favor at this precarious moment, and that's what friends are for.
Posted by Unknown at 9:50 AM No comments: 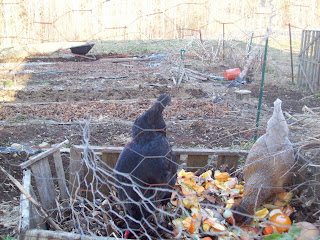 Another Emerson quote: "Consistency is the hobgoblin of little minds, adored by statesmen, philosophers and divines." Here are two chickens, seeming to follow Emerson's admonition not to live inside the fence of preconceived limits, especially set up by someone as foolish as me. The riches of the compost pile are too much of a temptation. On the upside is the eggs they lay: large, deep yellow yolks, tastier and more nutritious than anything you'll find in a supermarket. The free range life suits them well. If only they'd stay out of the recently planted pea beds. 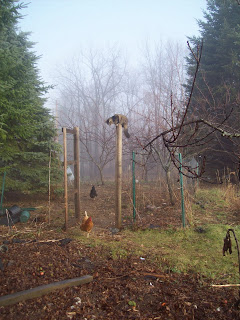 Here's the problem. The cat is in charge, and obviously has left the gate to the chicken yard wide open. We need to tighten up the process here.

May Day and Night 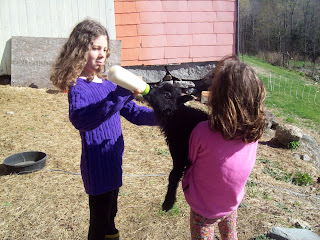 At home the season turns with lambs and tulips. Abroad, blood-soaked earth and rotting corpses. John Paul II is beatified on the day Osama Bin Laden is hunted down. The whirlwind seems to be gaining strength, but the beauty of the spring makes me feel that there is a sweetness in the wind also.
But I don't see what there is to celebrate in the death of Bin Laden. The ideas he spawned are still out there, ready for the next hate-filled maniac to pick up and run with. The solace we have, the sense of closure, is just an illusion. Violence is never done, and this act of violence will only add oxygen to the flames of vengeance simmering in the hearts of the millions of his followers and admirers. On the other hand,  I don't get anyone who condemns the way the US Navy Seals took him out either. What other end could there be for a man who lived not by the sword but by a mantra of mass murder and the use of suffering and destruction on an unprecedented scale to further his political goals?
We live in a dark world. The news of Bin Laden's death, and the photographs that inevitably will come, heighten the disconnect between the placid surface of things and the underlying hell that we skirt around. Thank God for the men and women who choose a life of service, ready to carry out mayhem in our name. I think Obama is right not to release the photographs. Let the story die as quickly as the flight of helicopters that carried Team Six into battle.
Posted by Unknown at 9:17 PM No comments: